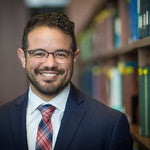 Tobias B. Rodriguez received his Juris Doctor degree at Chicago-Kent College of Law and is licensed to practice law in Illinois. Mr. Rodriguez received certificates in both Labor and Employment Law and Public Interest Law, and he earned a CALI Award for having the highest grade in his Legal Writing 3 course. He received his Bachelor of Arts at Princeton University, where he majored in Psychology and earned a certificate in Gender and Sexuality Studies.

While in law school, Mr. Rodriguez was a Supervising Manager at the Self-Help Web Center, helping pro se litigants at the Daley Center, President of the school's LGBTQ student organization Lambdas, and an Auction Chair for the Kent Justice Foundation's annual spring auction, raising money for public interest student summer scholarships. In recognition of his volunteer work, Mr. Rodriguez was awarded a Dean's Distinguished Public Service Award. He was also a student editor for the Employee Rights and Employment Policy Journal, part of the law school's nationally recognized Institute for Law and the Workplace.

Mt. Rodriguez is an active member of Chicago's LGBTQ bar association, LAGBAC, as well as Illinois' Latino bar association, HLAI. He stays active in Chicago at his local CrossFit gym, and through running and biking. He appreciates exploring new neighborhoods and watching live musicals, plays, and concerts.